A Christian plan to promote peace by taking a statue of Our Lady of Fátima from Portugal to Syria has been postponed because of the dire state of affairs in Damascus, but it has not been cancelled altogether.
The largely sectarian war between Shia and Sunni Muslims over the past four years has killed 200,000 and displaced 11 million Syrians, including many Christians caught up in the conflict.
A symbolic gesture amid the unfolding human catastrophe in Syria, the plan to take a replica pilgrim statue to Damascus from the world-renowned Fátima Shrine in central Portugal was announced in the middle of last month. 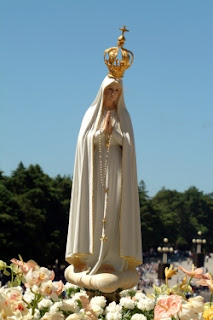 The statue was to have arrived on Monday, 7th September. On that date two years ago, Pope Francis held a day of fasting and prayer in St Peter’s Square, Rome, during which he said: “Forgiveness, dialogue, reconciliation – these are the words of peace, in beloved Syria, in the Middle East, in all the world.”
The Fátima visit had been requested by the Syrian Melkite and Greek-Catholic leader, His Beatitude Patriarch Gregorios III. Having agreed to the request, the Shrine then received a communication from the patriarch on 27th August asking for the visit to be postponed because conditions in Damascus were “aggravated.”
The patriarch did not consider it “opportune or convenient” and asked that the visit be delayed “to a later and more favourable date.” No new date has been set, but a Shrine spokesperson affirmed that “the visit will happen.”
The idea of the pilgrimage is “to implore the maternal intercession of the Blessed Virgin Mary for peace and for the well-being of Christian communities who have been suffering intensely from the horrors of war.”
The Christian community in Syria is one of the world’s oldest. The apostle Paul is said to have been converted on the road to Damascus. Some Christians in the ancient town of Maaloula, about 50 kilometres northeast of Damascus, can still speak Aramaic, the language of Jesus.
Prior to the unrest that accompanied the Arab Spring, the ethnically mixed Christian community of 1.8 million, or 10% of Syria’s population, enjoyed peace and religious freedom under the regime of President Bashar al-Assad.
The worsening civil war and persecution by Islamic fundamentalists have made life intolerable and forced what Patriarch Gregorios III has described as a “tsunami” of Christians to flee.
The Catholic Herald reports that the patriarch has issued an impassioned plea to young people, begging them to stay. In an open letter, a copy of which was sent to Catholic charity Aid to the Church in Need, he said: “The almost communal wave of youth emigration, especially in Syria, but also in Lebanon and Iraq, breaks my heart, wounding me deeply and dealing me a deadly blow.”
The patriarch added: “Given this tsunami of emigration… what future is left for the Church? What will become of our homeland? What will become of our parishes and institutions?”
Prior to the pilgrimage postponement, the Bishop of Leira-Fátima, António Augosto do Santos Marto, said he wished “to respond to the appeals of the bishops in the Middle East, witnesses to the extermination of Christians in the face of the indifference of the international community.”
The rector of the Fátima Shrine, Fr Carlos Cabecinhas, had emphasised that “the message of Fátima is a message of peace.” He had urged Christians to support the statue’s visit with prayers “so that the Lord may grant peace to Syria and strengthen the Christians who live there.”
Catholics believe that the message of Fátima was delivered during apparitions of the Virgin Mary in 1917 and that it includes the declaration that “no suffering is in vain.” The vision of the so-called third secret of Fátima ends with an image of hope, which is what the pilgrim statue is intended to convey.
In a related development concerning the ‘martyrdom’ of Christians as prophesied in the third secret of Fátima, a group of nuns from a Syrian monastery made an offering of three bullets and a handkerchief to the Bishop of Leiria-Fátima in honour of three Syrian Christians executed on September 4, 2013.
The Shrine reported that the three were killed by jihadists in Maaloula, one of the most beautiful and historic towns in Syria, because they would not renounce their Christian faith. 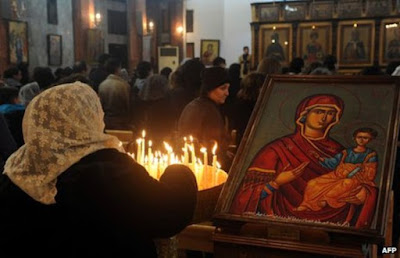 Christians worshipping in Syria
Posted by Portugal Newswatch at 3:50 PM