The Welsh fugitive conman Kenner Elias Jones, a Walter Mitty character who disappeared two years ago after being tracked down in Portugal, has showed up in Spain, still leading an extraordinary life of fantasy and fraud.
Best known as Ken Jones, he has defrauded charities, religious institutions and hospitals, as well as many companies and individuals, in a criminal career spanning 40 years and involving more than 60 convictions.
In recent months he has been up to his old tricks in the Murcia region of 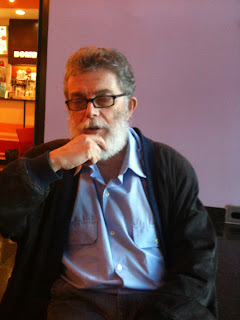 southeastern Spain. The Guardia Civil in Cartagena say they are aware of Jones staying in local hotels and leaving without paying the bills, but like their counterparts previously in Portugal, they seem unable or unwilling to arrest him.
Jones, 62, ‘collapsed’ in a restaurant and was taken to a district hospital near San Javier where he stayed having tests for six weeks. On being discharged, apparently in good health, he promised to settle the bill of more €26,000 with medical insurance. He had pulled the same stunt in a Portuguese hospital.
Over the past couple of weeks and using the Christian name Elias rather than Kenner or Ken, Jones has been spotted relaxing in the Murcia seaside resort of Santiago de la Ribeira. It is thought he may now be in Valencia, either gadding about or relaxing in hospital.
Charged with stealing thousands of pounds from an employer in the UK, he absconded from Lewes Crown Court in Sussex before his trial 10 years ago. He has been on the run ever since.
Long before that, he had been sentenced in the Old Bailey in London to three years’ imprisonment for committing theft and forgery. Coventry Crown Court sentenced him to 15-months’ jail for obtaining money by deception. He received a further 18-month sentence for deception and fraud from the Merthyr Tydfil Crown Court in South Wales.
Originally from Caernarfon, Gwynedd in North Wales, his colourful career has also included imprisonment and deportation from both Canada and the United States where he was deemed by officials to be “a danger to society.” A senior immigration officer in the US described him as “the best conman I have ever encountered in my entire career.”
Between fleeing the UK in 2003 and turning up in Portugal in 2011, Jones, a.k.a. Kenneth Ngeiwo Hawkins, spent years in Kenya posing as a doctor and administered medicines to children athough he had no medical qualifications. He is still wanted in Kenya for alleged debts of more than US$100,000.
An estate agent in the town of Palmela, south of Lisbon, told me how in 2011 Jones approached him saying he wanted to buy a house in the €400,000 to €600,000 price range. The wily Welshman went on to diddle the agent out of hundreds of euros by saying his foreign credit card was incompatible with the Portuguese system and he needed money urgently for medicine and other vital expenses.
On the understanding that Jones was transferring money from an overseas bank account, a Palmela travel agent handed over tickets worth €2,500 for Jones’ wife and two adopted children to fly into Lisbon from Kenya. The travel agent reported the scam to the Polícia Judiciária but she never got her money.
The return trip to Kenya was paid for by the Cáritas charitable organisation in Sétubal, according to a reliable Palmela source.
After being exposed in Portugal by dogged investigators from the BBC Wales Week In Week Out TV programme, Jones disappeared again and has gone about his wicked ways unreported until now. He is still pretending to be a qualified doctor and an ordained Anglican priest. He tells people he is planning to rejoin his family in Kenya where in 2003 he set up a charity called Luke’s Foundation. Even for the highly imaginative Ken Jones, getting out of Europe may now prove to be difficult: his passport expired at the end of January this year.
Those who have met him say he is a very intelligent, easy-to-talk-to, plausible and likeable person who confesses to multiple lamentable health problems – but then those are normal characteristics in a successful conman.
A full, unexpunged account of his activities over the past 40 years in his own words would make a riveting book – but who would believe it?

* algarvenewswatch will welcome any further accurate, honest information from readers. Please post comments below or send information to lenport@gmail.com. Be assured that sources will remain strictly confidential if that is their wish.
Posted by Portugal Newswatch at 9:20 PM