In introducing the so-called Great Repeal Bill in the House of Commons last week, the UK’s chief negotiator in Brussels, David Davies, said the intention of the bill was to ensure “a calm and orderly exit” from the EU.
Only Big Ben remained quiet. It has been silenced for extensive repair work. But politicians of all stripes erupted furiously in a howling debate that heard the Great Repeal Bill denounced as a government “power grab.” The Independent newspaper warned that the bill was no less than a major “threat to democracy.”
The bill, which would incorporate relevant EU law into the British legal system, has also been described as an “astonishing monstrosity.”
Nevertheless, a majority accepted it in a midnight parliamantary vote. That’s not the end of the battle, however. Plenty more fierce argument over the bill lies ahead.
Calm and order have been noticeably absent since the outpouring of lies and distortion during last year’s referendum campaign, through the parliamentary political turmoil that followed, and on to the belligerent divorce proceedings now underway in Brussels.
Last weekend saw the start of the anti-Brexit “autumn of discontent.” Protest groups are demanding a rejection of the referendum vote.
Instead of feeling calm, British nationals living in Portugal and other EU countries can be excused for feeling rather anxious or angry, befuddled or just plain fed up with the pro-Brexit efforts “to make Britain great again.”
Unfortunately, it’s impossible to get an accurate picture of what British expats in Portugal really think. For starters, it’s unknown how many of them are living here. Many remain unregistered, though there has been a scramble to apply for Portuguese residential permits to give a measure of security amid the mess unleashed by “the will of the people” back home.
Recent reports claim hundreds of thousands of retired Britons in Europe who cannot afford private healthcare abroad may be forced to return to the UK unless the government guarantees their healthcare will continue to be reimbursed by the NHS.
It has been pointed out, however, that returning pensioners would be a drain on the NHS and the UK housing market as well.
Other reports have revealed a surge in the number of British pensioners wanting to move out of the UK and settle in Portugal, Spain or France, fearing the imposition of life-changing restrictions when the UK leaves the EU.
Concern among established British residents extends to those contemplating moving here permanently, as well as holidaymakers.
The pound has continued to plummet against the euro and more pressure is forecast, at least in the short-term. Analysts say sterling is heading for parity with the euro for the first time in the single currency’s 18-year history.
The exchange rate has prompted many would-be property buyers in Portugal to adopt a “wait and see” attitude. On the other hand, as Kerstin Buechner, director of QP Savills, specialalising in in the up-market Quinta do Lago and Vale do Lobo areas of the Algarve, has told us: “The loss in the value of the pound is stimulating our vendors (almost 100% of them) to reinvest in the local market as opposed to taking the funds back to the UK. This has most certainly contributed to our impressive sales volume this year of over €100 million, which has exceeded all our expectations.”
Many tourists have stayed at home despite the appalling weather in Britain this summer. Fortunately for Portugal, the big decline in British visitors has been offset by a significant increase in other nationals.
Many of the Brits who have spent their holidays in the Algarve this summer have been economising by buying more groceries in supermarkets and dining out less in restaurants.
Among long-term expats, there is still smouldering outrage that those who had lived here for more than 15 years were denied the right to vote in what turned out to be a close-run referendum.
Ardent pro-EU expats here are in touch with protest groups across the continent about what might be done to come up with a better solution than Brexit.
At the other end of the spectrum, some expats are contemptuous of the European Union. Yet it seems that many of these ardent Brexiteers want to continue living out here in the sun.
What lies ahead is as much a mystery now as it was during the referendum. It can still only be guessed at. Brexit may be disastrous for both the UK and the EU, or it may indeed help make Britain great again.
Meanwhile, for the UK and EU expats being used as “bargaining chips,” there is still no sign of agreement on their future rights, let alone getting to grips with the fiendishly complex matter of trade relations.
Instead of ensuring calm and order, all this Brexit baloney looks like bungling on and on and causing yet more chaos.
It may or may not be sorted by the time Big Ben strikes again - and that's not scheduled until 2021. 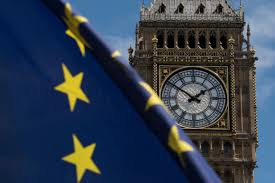