In contrast to the political mishmash created by the recent general election, Sunday’s presidential poll shooed in a clear winner who promises to be a force for stability.
The 20th President of the Portuguese Republic, Marcelo Rebelo de Sousa, is expected to play a crucial role in calming the country’s current volatile situation. He could be pivotal in Portugal’s political future.
Although formerly a leader of the centre-right Social Democratic Party, he is regarded as a moderate and has described himself as being “on the left wing of the right.”
The two runners-up were António Sampaio da Novoa, a left-wing former university dean, and 39-year-old Marisa Matias who was backed by the Left Bloc. Former Socialist Party leader Maria de Belém came in a poor third.
At 67, Lisbon-born Rebelo de Sousa has been a government minister, a professor of law and a journalist. He enjoyed great popularity as an enternatining political pundit on national television.
He is reputed to read two books and sleep for only four or five hours a day. For fun he goes surfing in the waves off Guincho Beach, Cascais.
On moving into the Palácio de Belém, the official residence of the head of state, Rebelo de Sousa will assume largely symbolic and ceremonial duties. He will have no administrative role, but he is known to favour conciliation and consensus. His powers of persuasion in acting as a counterweight could become key.
“Everything that helps to build political stability, common ground that safeguards governability is a priority.... now is not the time for divisions,” he said prior to the election.
The constitution allows the president exceptional powers in exceptional circumstances. He will be able to dissolve parliament, appoint prime ministers or call for a new general election if deemed necessary.
Few commentators think the present minority government under Socialist leader António Costa can survive a full four-year term because it relies on support from the radical Left Bloc and the Communist Party.
The president and the country will be watching carefully as the government struggles to curb the burden of austerity, which means lowering taxes, reversing public wage cuts, increasing the minimum wage, restoring public services and lifting the freeze on pensions..... all this while reducing the deficit, boosting consumption and investment, and complying with EU rules on fiscal discipline without the anti-EU far left pulling the plug on their support.
Costa says he is confident Brussels will approve Portugal’s 2016 draft budget presented last Thursday. It will now be analysed by the European Commission. Changes could be ordered before the government starts implementing the budget.
At the the World Economic Forum last week in Davos, Switzerland, the Socialist economy minister, Manuel Caldeira Cabral, said: “I don't think that the presidential election is going to bring any surprise or any problem to the government.” He added: “The centre-right wing candidate is quite moderate and it was quite sure that he is going to maintain the government and the legislature.”
That could be wishful thinking. Some commentators believe the government is bound to fail and that the president may have to step in and call an election during his first 12 months in office.
The new president succeeds Aníbal Cavaco Silva who served as conservative prime minister from 1985 to 1995 and for two consecutive terms as president from 2006. Now aged 76, Cavaco Silva says he is ready for a rest.
It’s just as well President Rebelo de Sousa doesn’t need a lot of sleep, but he can forget about his surf board for a while. 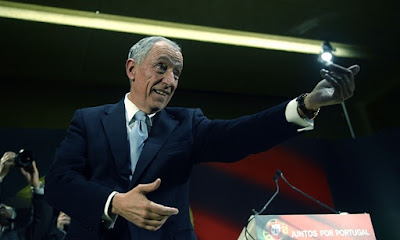 Charles Every, 100 years of age

Charles Every, thought to be the Algarve’s oldest foreign resident, celebrated his 100th birthday on 20 January.
His granddaughter, Kelly, who lives in England, was also born on January 20. She gave birth to her first baby, a girl, just a few days early last week otherwise it might have been a triple birthday celebration within the family.
In addition to a congratulatory message from Her Majesty the Queen, tributes were paid at a surprise luncheon of the ‘Monday Club’ Charles founded five years ago to bring together long-term residents for monthly get-togethers in the Carvoeiro area. It has now been renamed the ‘One Hundred Club’.
In a cheerful, impromptu speech at the luncheon, Charles told his well-wishers: “I don’t know what all the fuss is about!”
The youngest son of the 11th Baronet Sir Edward Oswald Every, Charles was born in Leighton Buzzard, Bedfordshire. He was educated at Harrow, one of England’s most distinguished public schools, but he disliked it because “the people there were too snobbish.”
In 1939, just before the outbreak of World War II, he qualified from London University as an architect, but soon found himself in the British armed forces and on his way to serve in India.
Charles’ architectural and town planning career began in earnest after the war in West Suffolk. After a couple of years, in 1949, he was on the move again, this time to South Africa where he successfully pursued his professional career for the next 21 years.
On eventually deciding he wanted a home in Europe, he started looking in Greece and worked his way westward.
“If I’d gone any further I would have fallen into the sea,” he says.
The Algarve was his final destination. He fell in love with Carvoeiro in 1967, bought his current home on the outskirts of the village in 1970 and has lived there ever since.
His daughter Vanessa and son-in-law Terry de Beer moved from South Africa to join him almost 14 years ago. The family links with South Africa are intact through his grandson Ryan and two great-grandchildren.
Having long enjoyed landscape gardening, Charles developed a particular passion for cultivating water lilies. Gardening and garden ponds continue to occupy much of his daily life.
Asked to what he owed his longevity, the astute and quick-witted centenarian mentioned “moderation,” but added that it probably had more to do with family genes - “and good luck.” 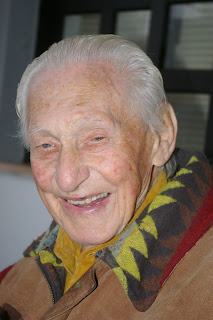 100 years of age this week
Posted by Portugal Newswatch at 2:54 PM 0 comments

Sue Ellen Allen, who lived for years in the Algarve as a fugitive on the run from American justice, had the honour of sharing First Lady Michelle Obama's box in the House of Representatives during the president’s last State of the Union address.
A White House announcement on the eve of Tuesday’s address said that Allen and a small group of other special guests “personify President Obama’s time in office and most importantly, they represent who we are as Americans: inclusive and compassionate, innovative and courageous.”
It was in the Algarve in 2002 that Sue Ellen and her husband David Grammer, then using the aliases Susanna and Michael Grammiere, were exposed as fugitives. They had absconded seven years earlier, before being convicted in absentia of defrauding US investors of more than a million dollars.
Former friends in the Algarve alleged that the Grammers had cheated them out of investments here too.
In the face of bitter accusations and threats to turn them in, the Grammers left their home in Silves and surrendered to the FBI in the American Embassy in Lisbon. Sue Ellen was undergoing treatment for cancer at the time.
“With only two more chemo sessions to go, our cozy world, our three dogs and four cats, vegetable garden, fresh food and pillow-filled world collapsed,” she recalled in a memoir, The Slumber Party from Hell.
She served almost seven years as an inmate of Arizona’s state prison for women. After her release in 2009, she co-founded an organization called Gina’s Team to provide support for women prisoners and help them get back to community life and out of any more trouble with the law.
Gina’s Team was named after Allen’s cell mate, Gina Panetta, who died of leukaemia at the age of 25 while being treated in prison for breast cancer.
“Gina’s death started the next part of my life. She gave me my passion and my purpose,” Allen wrote in her memoir.
It was Gina’s parents who helped her start her campaign. Now a widow, Allen regularly returns to the same prison she was incarcerated in to help prisoners plan a positive future.
In a message at the weekend from her home in Scottsdale, Arizona, just before setting out for Washington, Allen said: “I will be sitting in the First Lady's box at the State of the Union message! It's an incredible honour to be there representing all the voiceless and faceless women who are still behind bars. I will take them with me in my heart. I’m also honoured that Gina's mother, Dianne Panetta, is joining me. It's the ultimate road trip.”
Obama has taken a special interest in prison life and last July became the first US president to visit a federal prison. In his State of the Union address he advocated criminal justice reform and reducing recidivism rates. The United States has more prisoners than any other country in the world.
By wanting to change the way prisons work, President Obama and Gina’s Team are very much on the same wavelength.
Allen told BuzzFeed News: “People say, ‘Why should inmates have education? Why should they have anything?’ Well it’s not a privilege or a reward. It’s a necessity. It’s a necessity for them and for society because they’re all going to get out, and if we don’t prepare them and help them, they’re going to go back to their old life.” 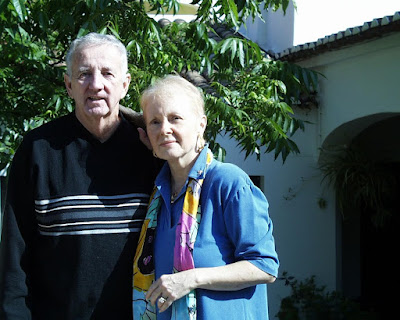 Photo above by B. J. Boulter in 2002  as the Grammers prepared to leave the Algarve and give themselves up in the US Embassy, Lisbon.

Below, Sue Ellen in Arizona as  a campaigner to help prisoners and for prison reform. 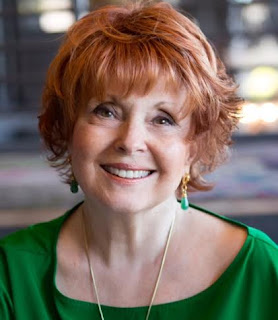