The proclamation at the end of last week’s United Nations climate change conference in Morocco was rather wordy, but the central point was clear: “Our climate is warming at an alarming and unprecedented rate and we have an urgent duty to respond.”
What is not clear is where do efforts to curb global warming go from here, now that Donald Trump has been elected leader of the free world?
Portugal’s Prime Minister António Costa was among the delegates from almost 200 countries who gathered in Marrakesh to push ahead with the Paris Climate Agreement adopted at the end of last year.
The gist of the Paris agreement is a commitment to keeping the rise in global temperatures to below 2 ºC, and if possible 1.5ºC, above pre-industrial levels. This envisages a carbon-neutral world sometime this century, with the amount of greenhouse gases emitted by human activity limited to the levels that trees, soil and oceans can absorb naturally.
The majority of scientists have long been saying that failure to move away from fossil fuels and restrain escalating temperatures is likely to have “catastrophic” consequences. In Portugal, for example, this is predicted to include rising sea levels that swamp coastal towns and desertification that cripples the tourist industry and agriculture.
Portugal has ratified the agreement along with most other countries and Prime Minister Costa has expressed solidarity with its aims and terms.
The latest Climate Change Performance Index compiled by German Watch and the European Climate Action Network puts Portugal in the top ten countries in the world fighting global warming.
The International Energy Agency, a Paris-based intergovernmental organisation established in the framework of the OECD, states in its 2016 review that in recent years “Portugal has continued to develop and reform its economic policy. This has meant rapid increases in renewable energy deployment, further market liberalisation in the electricity and natural gas sectors and greater emphasis on energy efficiency in policy making.”
Despite the accolades, activist groups in Portugal are continuing to press the present government to scrap prospecting licences granted by the previous administration and rule out any future offshore or onshore exploration for oil or gas.
Offshore concessions threaten normal activities along the entire coastline of mainland Portugal, say campaigners. Exploration on land also pose intolerable risks.
The campaigners argue that it simply makes no sense to continue to prospect for oil and gas if Portugal intends to meet the terms of the Paris agreement.
Although ratified by the majority of signatories, the Paris agreement, the culmination of 25 years of complex negotiations, seems now in jeopardy. Having described global warming as a hoax perpetrated by the Chinese, President-elect Donald Trump has named a long-time climate change sceptic and spokesperson for the fossil fuel industry, Myron Ebella, to take over as head of the US Environmental Protection Agency.
Trump promised that within 100 days of taking office he would cancel the Paris agreement and “stop all payments of US tax dollars to UN global warming programmes.”
Then on Tuesday this week he confounded everyone yet again. In conversation in the offices of the New York Times he conceded “some connectivity” between human activity and climate change.
Asked by journalists if he still intended to pull out of the Paris agreement, he said he had “an open mind to it.” and that he was “looking at it very closely.”
Should he go back to his original ‘promise’, it is hard to see how the Paris agreement could effectively work to its given timetable. America is second only to China among the planet’s biggest greenhouse gas emitters.
One positive that anti-fossil fuels campaigners take from all this is that Trump’s approval of coal mining and oil and gas extraction is backfiring. Increasing numbers of US citizens are reportedly joining environmental groups and there is speculation that Trump could inspire a whole new generation of climate activists.
The same will surely happen in Portugal if the government does not stop all fossil fuel prospecting in this country. 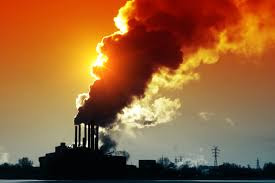 Posted by Portugal Newswatch at 7:38 AM 0 comments

Full moon madness across the world

Viewed from this relatively calm corner of the European continent, it seems as though the world is collapsing in an unprecedented period of political turmoil.

On Donald Trump’s election victory, top Portuguese model Sara Sampaio expressed the shock of many when she tweeted: “Brexit and now this! Wow the world has gone bananas.”
Okay, what’s going on is not funny but many people find it hard to get their heads around this combination of confusion and chaos.
The new superman of the western world and his counterpart in the east began by exchanging pleasantries rather than insults. The honeymoon between Trump and Putin is good news for Syria’s President Bashar al-Assad. Bad news for ISIS. Bad news too for NATO of which Portugal is a founder member and in terms of military strength currently rated at 17th out of the active 26 allied countries.
Trump has declared that NATO is “obsolete.” Without mentioning the supposedly sacrosanct ‘attack on one is an attack on all’ pledge, or that NATO fully came to the aid of the US following the 9/11 attacks, Trump has said that America may refuse to help any of its NATO allies unless they “pay their bills” and “fulfil their obligations to us.”
A spokesman for the Russian president took the opportunity to suggest that Trump begin rebuilding bridges between the two superpowers by telling NATO forces to withdraw from the Russian border.
NATO Secretary-General Jens Stoltenberg immediately warned: “We face the greatest challenges to our security in a generation. This is no time to question the value of the partnership between Europe and the United States.”
Military bands proudly played 'Rule Britannia' on Remembrance Sunday ceremonies in Great Britain even though Britannia clearly no longer rules the waves. A flotilla of Russia warships had provided a provocativel reminder of that by sailing majestically through the English Channel en route to Syria on 21st October, the anniversary of the Battle of Trafalgar.
Meanwhile, the partnership between the European Union and the United Kingdom continues to crumble with no coherent plan in sight. Foreign Secretary Boris Johnson has been accused of adding to the chaos.
During a recent spat with Johnson , an Italian economics minister, Carlo Calenda, said: “Somebody needs to tell us something, and it needs to be something that makes sense. You can’t say that it’s sensible to say we want access to the single market but no free circulation of people. It’s obvious that doesn’t make any sense whatsoever.”
Post-Brexit Britain is suddenly looking out of step with its “closest ally” too, though stories emerged this week that Prime Minister May is planning a Trump “charm offensive.”
While the presidential transition process is said to be in chaos and anti-Trump protests continue across a bitterly divided America, anger over traditional politics, austerity, high levels of unemployment and mass immigration are bubbling up across Europe.
Next month’s presidential election in Austria could see Norbert Hofer installed as Western Europe's first freely elected far-right head of state since World War II.
Geret Wilders, leader of the anti-immigration and Eurosceptic Dutch Freedom Party who has been campaigning against the “Islamisation of the Netherlands”, may be able to form a government after the Dutch general election in March.
Marine Le Penn, the self-proclaimed ‘Madame Frexit’ and leader of France’s far-right National Front, stands a good chance of following in Trump’s footsteps and winning a sensational victory in the French presidential election next April and May.
All eyes will then turn to campaigning for September’s local elections and October’s national elections in Germany. Angela Merkel’s popularity has been punctured by her highly controversial immigration policy and she has yet to announce if she will stand for another term as chancellor. Her Christian Democrat party will be severely challenged by growing support from Germany’s anti-Muslim AfD party.
October’s general election in the Czech Republic is forecast to present a tough battle for Prime Minister Bohuslav Sobotka and his centre-left Social Democrats in the face of voter distrust and anti-EU protesters.
Ten shambolic months during which Spain was without a properly functioning administration were finally sorted at the end of last month when the conservative prime minister Mariano Rajoy was elected to a second term of office leading a minority government.
The first foreign leader to congratulate Rajoy in Madrid was another minority leader, Portugal’s socialist prime minister António Costa who relies on support from anti-EU and anti-NATO far left parties.
The two leaders seemed like the best of friendly neighbours and promised further bilateral summit meetings, the next in Portugal preceded by a cruise from Spain down the Duroro.
That this week’s meeting between Rajoy and Costa was held on Monday without a hint of madness when the supermoon was at its fullest perhaps augurs well for Iberia if not the rest of the world. 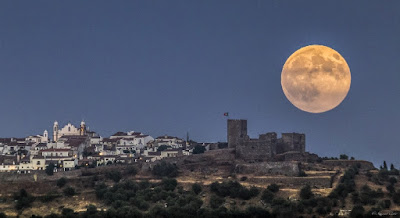 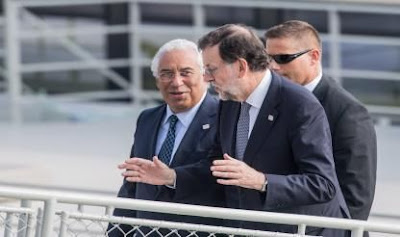 In step left and right, Portuguese and Spanish prime ministers

Posted by Portugal Newswatch at 10:44 AM 1 comments