As the formal process of removing Britain from the European Union gets underway this week, two parallel surveys highlighting expatriate concerns show consensus between respondents regardless of their nationality and whether they are living in the UK or in the remainder of the EU.
Overall, 80% of the 1,900 respondents in the surveys conducted by the interactive platform Expat.com agreed that Brexit posed “a threat” for the UK.
When asked if Brexit had affected their daily life, 38% of British expatriates said it had already had a “significant” impact, while 22% said that so far it had made only a “slight” change.
The same questions put to EU expatriates living in the UK yielded similar results.
The nature of the questions in the surveys allowed respondents to express emotions. According to researchers, “an alarming number” acknowledged that the decision to leave the EU was impacting on their mental health.
Respondents spoke of stress and depression due to the unpredictable nature of the Brexit negotiations, and anxiety over how the outcome may affect their careers and the education of their children.
Around 12% of expatriates living in the UK reported experiencing or witnessing some form of racism. A further 8% revealed that they now feel unwelcome as a result of the ‘leave’ referendum.
“Some people make nasty comments about me as an immigrant, accusing me of taking a job from the British,” said one respondent.
“I had my car vandalised six times in the months before the vote. I was fired from my job afterwards,” said another.
“They see us as second-class citizens,” insisted a futher EU national.
Some Britons abroad spoke of a change of attitude towards them, as well as a sense of embarrassment and fear over “rising nationalism in the UK.”
Beyond the Expat.com survey, British government officials say they do not expect the status of expatriates to change during the negotiations over the next two years.
But Prime Minister Theresa May has made it clear that any long-term guarantees to EU nationals in Britain will depend on reciprocal arrangements with the EU member states.
There is much talk of possible complex deals but as of now no one knows if the negotiations will result in any sort of deal at all.
Former Portuguese prime minister and the previous president of the European Commission José Manuel Barroso for one has warned that Brexit is on course to fail unless both Britain and the EU negotiate constructively and are willing to compromise.
Of the four million expatriates involved, it has to be said that the Brits in Portugal and Portuguese in the UK would seem to be less vulnerable than most of the others.
Despite soothing words recently from British and Portuguese officials, there are many worrying uncertainties, though it is hoped that the centuries of close alliance between Portugal and Britain will come into play in the event of a critical breakdown in the Brexit deliberations. 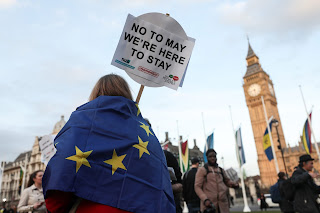 Following the announcement that two of the visionaries of Fátima, Francisco and Jacinta Marto, are soon to be canonised, hopes have been expressed that the process be accelerated to elevate the third and principle visionary, Lúcia Santos, to sainthood.
The three shepherd children claimed to have witnessed apparitions of the Virgin Mary at Fátima in 1917.
The Marto siblings are likely to be canonised during Pope Francis’ pilgrimage to Fátima on 12th-13th May, the centenary of the first of six monthly Marian apparitions.
Although theVatican has yet to reveal the timing of the canonisation, it is now much anticipated following Pope Francis’ official recognition last week of the so-called ‘Miracle of the Sun’ at Fátima in October 1917.
The Vatican has said that Pope Francis signed the recognition decree during a meeting with Cardinal Angelo Amato, prefect of the Congregation for the Causes of Saints.
The cardinals and bishops who are members of the congregation must vote to recommend their canonisation and then the Pope would convene the cardinals resident in Rome for a consistory to approve the sainthood.
Portuguese newspapers reported in in 1917 that up to 70,000 people along with Francisco, Jacinta and their older cousin Lúcia watched a spectacular lunar display at the time the children had predicted a miracle.
The Marto siblings were beatified by Pope John Paul II in 2000. Papal approval of a miracle is required to elevate beatification to canonisation.
Francisco Marto, born in 1908 and the second youngest of the Fátima seers, died in 1919, a victim of the 1918 influenza pandemic that swept through Europe.
Jacinta Marto, who was just seven years of age in 1917, fell seriously ill in 1919 and suffered considerably before dying after an operation in a Lisbon hospital in February the following year.
Lúcia Santos, who was ten at the time of the apparitions, died in 2005 at the age of 97. All three of the seers now rest together in the basilica in the Fátima sanctuary, which will welcome hundreds of thousands of pilgrims from all over the world this centenary year.
Pope Benedict XVI decided to speed up the beatification process for Sister Lúcia in 2008. The Congregation for the Causes of Saints announced that the pope had chosen to dispense with the mandatory five-year delay usually required after the death of a nominee.
The process of beatifying had previously been considerably speeded up for Mother Teresa and Pope John Paul II.
Three years to the day after the death of Sister Lucia, Cardinal José Saraiva Martins at a Mass in Coimbra where she lived from 1948 until 2005, announced that Benedict XVI had decided to dispense with the missing two years.
For some, especially traditionalist Catholics long critical of the handling by successive popes of the so-called third secret of Fátima, the canonisation of Lúcia is being unnecessarily delayed and cannot come quick enough. 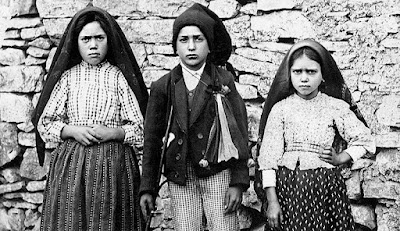 Posted by Portugal Newswatch at 10:14 AM 0 comments