Some fascinating comparisons between British expatriates born in the first week of the Aquarius sign of the zodiac are personified by Charles Every who turned 102 on January 20, and twin sisters, Mariota and Catriona Anderson, who are celebrating their  20th birthday today, Friday 26.
Although their homes are within a few kilometres of each other in the Lagoa area, Charles and the Anderson sisters have never met.
Despite the generation gap, and leaving aside all the usual horoscope baloney, they do indeed have much in common.
For starters, they have distinguished family backgrounds. The second son of the 11th Baronet Every. Much of Charles' early life was spent in the historic mansion of Egginton Hall in Derbyshire, Egland.
The Anderson sisters are direct descendants of the greatest Scottish bard, Robert Burns, and their original home was a castle near St Andrews in the kingdom of Fife in eastern Scotland.
Neither Charles nor the twins show any signs of pretentious aristocracy and they have certainly downsized in terms of accommodation.
Charles was educated at Harrow, one of England's foremost public schools, founded in 1572 by a Royal Charter granted by Queen Elizabeth 1. He disliked the school because “the people there were all too posh”.
The Anderson girls attended the Algarve International School in Porches, before studying for international baccalaureate diplomas back in Scotland.
A the age of 20, Charles was studying for a degree in architecture at London University. The Andersons are at present studying at King's College, London, for degrees in international relations.
Charles became familiar with international matters in his twenties during the Second World War. He served with the British armed forces in India and Burma. After the war he spent more than two decades pursuing a successful career as a town planner in South Africa.
On deciding to move to Europe in his early fifties, Charles ended up buying a house on the outskirts of Carvoeiro and moved into it permanently in 1969. He has lived here ever since.
The Anderson twins were just four months old when their parents, Fiona and John, brought them to settle in the Algarve in 1998.
In Charles' generation the young faced a deeply uncertain future because the world then was steeped in social and economical turbulence as well as international conflict. And so it is for Mariota and Cariona's generation today.
It's a very different world now, of course, with very different challenges. Life was generally much better in the old days, according to Charles.
The Anderson twins acknowledge that modern technology has both bettered some everyday problems and worsened others, but say that as students they must remain optimistic.
People generally are living longer nowadays. Population statistics have soared. The total population of the world when Charles was a lad was less than two billion. It's now about 7.6 billion. If the Anderson twins make it to Charles' present age, the world will be inhabited by an estimated 11.8 billion.
Females have long had a higher life expectancy than males, though the gap is narrowing. In Britain, when Charles was born, the average life expectancy for a man was 60 years. Today the average life expectancy in Western Europe is79 for a man and 84 for a woman.
As for Brexit or no Brexit, Britain for Charles is a thing of the distant past.. He intends to spend the rest of his days in Portugal and in the place he loves most of all the aquatic garden in his Carvoeiro home.
While specialising in international relations, either or both of the Anderson twins may wish to pursue careers abroad, but their beloved “home” will always be the Algarve. 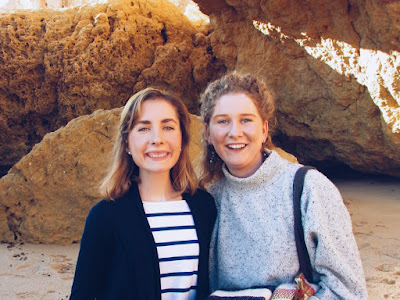 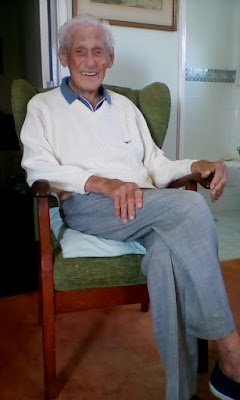 Recent photo of Charles by Lisa

+ Sadly, Charles had to spend his birthday in hospital and undergo hip surgery after an early morning fall. He is  recovering but, given his age, is expected to remain in hospital for a week or more .