Angela Morado of the British Vice Consulate in the Algarve has been presented with an Honorary MBE, awarded to her by Her Majesty the Queen, in recognition of her significant contribution to relations between the United Kingdom and Portugal.
The award was formally presented by the British Ambassador to Portugal, Kirsty Hayes, at a reception on Tuesday in Portimão.
The Ambassador said in tribute: “Angie has proved herself to be a consummate professional in dealing tenaciously with hundreds of consular cases, and providing exemplary support to many distressed and vulnerable British nationals.
“Angie always sees each and every person as an individual, an essential skill in consular work, where each person has a set of unique, personal circumstances, even if the type of situation is one she has dealt with many times before.
“She has a seemingly limitless supply of empathy and compassion for fellow human beings, often facing up to the worst situation in their lives in a foreign country, sometimes alone, where they don’t speak the language or understand the norms”.
The Ambassador also noted that crisis response is another significant responsibility of consular staff around the world, and, in 2010, Angela was deployed to Funchal to assist British nationals caught up in the flood crisis there. With all communication systems down, there were huge challenges in making contact with British residents and holidaymakers in Madeira.
A year later, Angela went to Malta at one hour’s notice to assist with the evacuation of Libya during the Arab Spring crisis.
Angela Morado was born in Durban, South Africa. At the age of 18 she emigrated to Portugal with her parents and sister. Her father is Portuguese.
Angela was hoping to study fine arts but did not have the Portuguese language skills at the time to pursue a university degree in Portugal.
Instead, in October 1988, she started working for the UK Foreign and Commonwealth Office at the British Consulate in the Algarve, having been advised about the job vacancy by her previous employer, Zita Neto, Director of the language school Interlingua in Portimão. The British Consulate was just up the road from the school.
“I was interviewed by the then Honorary British Consul, Dr José Pearce de Azevedo, to whom I am ever grateful for teaching me the Portuguese I am able to read, write and speak today,” she says.
Having started as a consular support officer, she was promoted to consular assistant in 1994. With the retirement of her former colleagues Ron Underwood and Zefita Azevedo, she was promoted to Proconsul and then appointed Vice Consul in 2004.
She has served under seven consuls. Commenting on her MBE award, Roger Nuttall, the British Consul in the Algarve between 2000 and 2005, who now lives in retirement in England, said: “Among former colleagues in my 40 plus years in the Diplomatic Service, Angela Morado was simply the best consular officer I ever worked with. She was conscientious, professional, and wonderful with the public, British and Portuguese alike. I wish we could clone Angela for every consular job in the Service”.
Angela’s own reaction to the MBE award: “I am truly honoured for the recognition and proud to work for this organisation that has provided me with so many opportunities in my career to learn and develop and to travel.
“Above all it is the great job satisfaction I have every day in being able to help vulnerable people. Within the consulate we have a saying that “there is never a dull day” and this makes my job exciting.
“I have always worked with fantastic teams who have been supportive especially when dealing with the more complex cases.
“It is a luxury these days to be able to say that I get paid for the job that I love doing”. 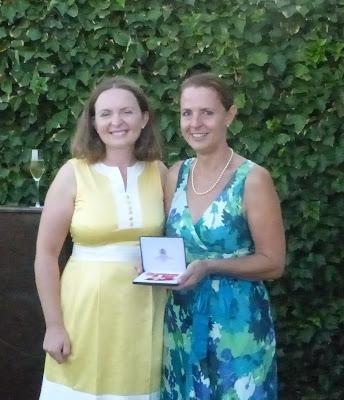 Angela (right) with the British Ambassador
photo by Clive Jewell, the UK's Vice Consul in the Algarve.
Posted by Portugal Newswatch at 10:55 AM 0 comments

The tourist trick of grabbing the best available sunbathing spots by laying down early morning towels is said to have been pioneered long ago by the Germans, but they have met their match.
The competition used to be fought over poolside sun-loungers and the British learned to become even better at it.
Nowadays the beaches have become hotly contested battlegrounds and the Portuguese have become wily protagonists.
That is certainly the case on the long and lovely beach front by the high-rise resort of Armação de Pêra in the Algarve.
For the second year running, and despite much criticism and ridicule, many towels and sun-umbrellas are in place in prime positions on the otherwise empty Armação sands between 7 a.m. and 8 a.m. each morning. They remain there, deserted, until mid-morning.
The pre-breakfast predators must wake up early or go to bed very late to ensure success.
Armação’s predominately Portuguese population swells from about 5,000 in winter to more than 120,000 in mid-summer. Tower blocks of vacant apartments suddenly become full when the holiday hordes descend from Lisbon and elsewhere in the north.
In August the beach becomes packed from one end to the other. Barely sardine-sized patches of sand are at a premium, especially at high tide.
And never mind the prolonged heat wave, high ultraviolet alerts and the danger of skin cancer. Live for the moment! Rising sea levels due to global warming may mean that within a few decades there will be no beaches or seaside resorts in southern Portugal at all.
The Brits, the most numerous of the foreign holidaymakers in the Algarve, used to compete with the Germans by laying down early morning towels emblazoned with the word “reserved”
Such Rule Britannia arrogance has been curtailed. Indeed, in Albufeira, just east of Armação, some holidaying Brits seemed uninterested in seeking any sunlight at all.
Having voted to leave the EU did not inhibit a festive “Portugal Invasion” of late-night revellers, some of whom became drunken louts on the rampage and requiring the attention of riot police.
More Brits than usual chose to stay at home this summer, only to be inundated by rain and unusually miserable weather at times across the UK.
Many of those who did come abroad his year have had genuine grounds to grumble about such things as the fall in the value of the pound and the long delays for non-Schengen passport checks.
There are plenty of other moans from visitors every summer, of course. Before early-morning towels and sun-umbrellas became an issue on Armação beach, one holidaymaker staying in a beach-front hotel had objected to the sound of the waves flopping on the shore. There’s no pleasing everybody. 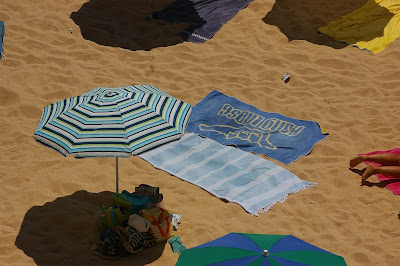 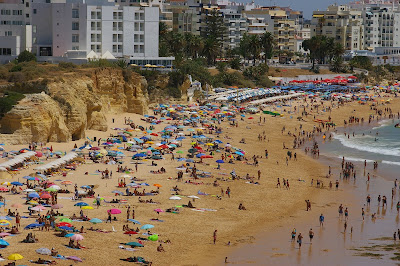