Conman Ken sought, but not by police

In a strange twist in the tale of notorious conman Kenner Elias Jones, he is now being sought not by police but by his first wife who divorced him many years ago.
Having been deported from Canada and the United States, Ken Jones has managed to outwit police forces across Europe, including Portugal, while on the run and continuing his life of fantasy and fraud.
As exposed in the past by the BBC and in this blog, Jones has had a prolific criminal career spanning more than 40 years in which he has chalked up more than 60 convictions and plenty of imprisonments.
A highly intelligent and likeable Welshman, his skills are such that a senior American immigration officer who described him as “the best conman I have ever encountered in my entire career.”
An arrest warrant was issued in Britain in 2003 when he failed to turn up for a trial. Since then, police in the UK and countries in mainland Europe have been informed from time to time about his whereabouts and various alleged fraudulent activities, but they have taken no action against him.
His first wife, a Canadian, is not aiming to have him arrested; she wants to return some of his personal belongings and talk to him about a book she is writing. Donna Lee Mackenzie, a former TV journalist, has been trying without success to locate Jones via the internet.
He was last reported in Sweden, posing as a doctor and a priest, seeking political asylum as a refugee from Kenya.
The BBC reported that after fleeing from the UK twelve years ago, Jones spent seven years in Kenya pretending to be a doctor and a priest, although he had no qualifications in either of these fields. He is believed to be still married to his third wife, a Kenyan living in her homeland.
Jones set up a charity in Kenya called Luke's Fund, but left Africa in 2010 with unpaid debts of over $100,000. A warrant for his arrest exists in Kenya as well the UK, but not in mainland Europe.
He turned up in Portugal in 2011. A property agent in the town of Palmela, south of Lisbon, said Jones expressed interest in buying a house in the €400,000 to €600,000 price range. The property agent said Jones conned him into ‘lending’ hundreds of euros by claiming he needed the money urgently for medicine and other vital expenses, but that his foreign credit card was not compatible with the Portuguese system.
A Palmela travel agent said she handed over air tickets worth €2,500 on the understanding that Jones was transferring money from an overseas bank account so that his Kenyan wife and two adopted children could fly from Nairobi to Lisbon.
On realising she had been defrauded, the travel agent reported Jones to the criminal investigation police (PJ), but she never got paid for the tickets. The Cáritas charitable organisation in Sétubal is said to have paid for the Kenyan wife and adopted children to fly back to Nairobi at the end of their Portugal visit. 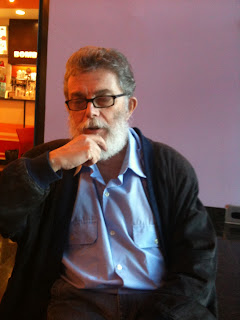 Jones’ next stop was in southeastern Spain where this picture was taken. His alleged behaviour included running up an unpaid bill of some €26,000 for a six-week stay and unnecessary medical tests in a district hospital.
In 2013 he turned up in Sweden. In a statement to the BBC in April this year police in Sweden confirmed they had received information about Ken Jones, but that it did not form the basis for investigating any suspected crimes he had committed in the country. The statement added that Jones was the subject of a police investigation in the UK, but because the police in Britain had not issued a European arrest warrant, they could not intervene.
We can now reveal that it was his estranged wife Donna Lee Mackenzie who posted a comment on Portugal Newswatch last month saying: “As someone who knew Kenner very well many years ago, I have some personal items I would like to return to him. Does anyone know how I could contact him to arrange this?  I will keep any such information confidential. If you can help, please reply to doncalonlan@gmail.com”.

Posted by Portugal Newswatch at 7:05 PM