Now that British Prime Minister David Cameron and his family have returned home, it can be revealed without the risk of fuelling further sartorial excitement  that they chose to spend their summer holiday in the delightfully named and idyllically located Cabana dos Rouxinois (House of the Nightingales), between Monchique and the Algarve highest point, Foia. 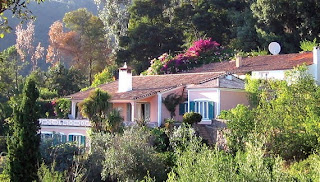 They stayed with the English owners and another couple of friends with young children at a place described as “the ultimate family holiday retreat with all modern facilities” and featured in Tatler’s ‘Top 50 villas to rent’.
Sleeping eight in the main house and four children and a nanny in  a cottage, this “English country house set amidst  three hectares of beautiful garden” normally rents for £3,000 per week in July and August, plus £500 for the cottage. 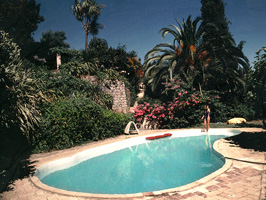 A special feature of the property is the immaculately maintained garden, originally designed and planted 30 years ago by Mr and Mrs Michael Hornby, creators of the famous Pusey Garden of Oxfordshire.
The Camerons’ holiday was six months in the planning, with a local agency, Turifoia, also arranging accommodation in a nearby villa and hotels for members of the prime minister’s personal staff and security personnel.
David Cameron, his wife Samantha and their three children clearly enjoyed their stay and in some respects were able to behave just like any other holidaying family. They bought their groceries at local supermarkets and ate at modest restaurants without causing too much of a stir.
The ruse of holding an initial photo opportunity in the public market in Aljezur, way over towards the west coast, failed to deflect the media from the Camerons’ real holiday whereabouts, but the family were able to fully relax thanks to CCTV cameras and a largish contingent of Portuguese police.
How different it might all have been had the prime minister decided to holiday on the . No sooner was he back in No.10 than he was confronted by escalating tensions with over .
The prime minister's concerns arose after said it was preparing to impose a €50 fee on the border crossing with the British territory and threatened to close airspace to planes using the airport.
That would certainly mess up a few holidays.
Posted by Portugal Newswatch at 7:02 PM