How Portugal is taking action to help avert a climate catastrophe

The success or failure of the COP26 climate summit may depend largely on reaching agreement on the transition from fossil fuels to renewables, a process Portugal is making considerable progress on while major polluting countries are lagging far behind.

The broadcaster France 24 has produced a series of special reports to coincide with the U.N. conference in Glasgow, including one depicting Portugal as “a country on the cutting edge of renewable energy technologies.”

France 24 explains why Portugal is the EU country that has been most successful at cutting greenhouse gas emissions since 2005, partly through the use of floating wind turbines and solar platforms anchored by chains to the seabed off its west coast.

Three of the filmed wind generators are located 20 kilometres out to sea and one of them is 190 metres tall, the tallest wind turbine in the world. Today, 65% of all the electricity consumed in Portugal comes from renewable sources. 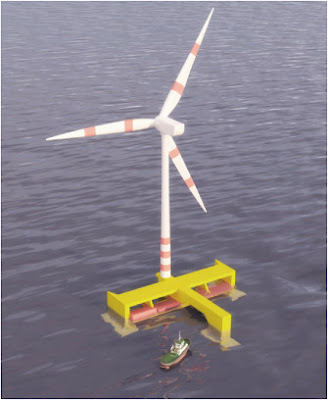 An analysis by the International Energy Agency (IEA), indicates that Portugal was among the first countries in the world to set 2050 carbon neutrality goals. Portugal’s energy and climate policies push for carbon neutrality primarily through broad electrification of energy demand and a rapid expansion of renewable electricity generation, along with increased energy efficiency.

“There is a strong focus on reducing energy import dependency and maintaining affordable access to energy. These policy goals are supported through clear targets, detailed national strategies and a wide range of regulations, economy-wide programmes and sector-specific measures,” says the latest IEA study.

As a result of increased economic activity and the high share of fossil fuels in its energy supply, Portugal’s greenhouse gas emissions increased by 13% from 2014 to 2018. There have been notable annual variations driven by the seasonal availability of generation from Portugal’s large fleet of hydropower dams.

Since 2005, land use change and forestry has, on average, reduced Portugal’s annual greenhouse gas emissions. However, in 2017, extreme wildfires caused notable emissions, and Portugal is facing an increasing risk of wildfires, says the IEA.

A report by the International Trade Administration of the US Department of Commerce shows that Portugal has focused heavily on developing renewable energy over the last two decades and that it continues to be a global leader in renewable energy production.

“A well-structured incentive mechanism and the adoption of ambitious targets helped this sector grow over the last couple of years,” says the trade association.

It continues: “Portugal’s new ambitious national energy and climate plan for 2030 and roadmap to carbon neutrality by 2050 targets at least 80% of electricity production coming from renewables and to further decarbonize the energy sector.

“The government is committed to a policy that will support the development of the market and ensure decarbonization goals are met in the most cost-effective manner.”

There is a strong focus in electricity and natural gas interconnection to unlock the potential of Portugal’s solar and wind resources and liquefied natural gas capacity to support local economic development and European energy security.

To help achieve these ambitious goals, the association goes on to report that Portugal has announced the decommissioning of the country’s two coal-fired thermoelectric power plants.  The EDP coal-fired power plant located in Sines closed in January 2021. The Tejo Energia Pego power plant is expected to close by the end of this year.

The country has also developed a hydrogen strategy with the intent to decrease natural gas imports and reduce greenhouse gas emissions by 2030.

Meanwhile, the IEA points out that the Azores and Madeira autonomous regions set their own energy and climate policies and strategies. These islands still heavily rely on oil products, even for electricity generation. With the increasing introduction of renewable energy, oil demand is decreasing and some islands have already reached high shares of renewable electricity generation by leveraging a wide range of technologies (geothermal, wind, hydro, solar PV and energy storage).

The Azores and Madeira are testing different approaches to increase the share of renewables, boost the use of electric vehicles and improve the energy efficiency of residential and service sector buildings.

According to the IEA, the Azores’ and Madeira’s programmes to support the energy transition appear to be more ambitious than those for mainland Portugal, and these island regions can pioneer living labs to test innovative solutions, like storage, smart grids, electric mobility and integration of very high shares of renewables.

It’s clear that a small country like Portugal can set examples and make a contribution to avert the high risk of a climate catastrophe, but, of course, it’s up to major polluting nations - China, the United States India and Russia - to reach a workable solution at the COP26 summit.

Posted by Portugal Newswatch at 3:42 PM