Some people continue to be complacent about becoming infected by COVID-19 even with the uncertainties posed by the latest variant in the run-up to the normally busy festive season.

One thing virtually all medical experts agree on is that as many people as possible should get fully vaccinated, yet some people are still refusing to do so despite the current widespread surge in infection and death rates.

In recent days we spoke to a resident in the Algarve who is suffering from post-COVID condition, otherwise known as long COVID. He wished to remain anonymous, but wanted to encourage those refusing vaccines to change their minds and get the jabs as soon as possible. Those refusing because of complacency “are stark, staring mad!” he said.

He has had personal experiences he would not want anyone else to go through. Indeed, he feels very fortunate to have survived.

How he contracted the virus almost a year ago remains something of a mystery. He was living alone in a relatively isolated home and had stopped mixing with almost everyone except when he went shopping no more than once a week in the nearest supermarket.

Did he wear a facemask and adhere to the social distancing rules when he went shopping? “Absolutely!” he said. “Like everyone else I was being cautious about my movements.” However, he had not been vaccinated when he contracted the virus because the slow-starting vaccination programme in Portugal had barely begun.

His first reaction to feeling COVID symptoms was one of shock. “I felt hot, feverish and weak. An ambulance took me to the hospital in Portimão where I was diagnosed and admitted to intensive care. It all happened rather fast and I didn’t really have time to take it in.

“After two weeks on forced oxygen, my kidneys started to pack up and I needed dialysis. I had the two weeks hooked up to all those hospital machines, staring at strip lights in the ceiling that are never turned off, and occasionally getting a glimpse of someone who hadn’t made it.

“I had four days of paranoia and was convinced the hospital staff were out to kill me. I reacted violently to their ministrations.

“All in all, not a good experience. Does someone refusing to be vaccinated want to go through that?”

He continued: “Now, almost a year on, I struggle with energy levels and feel tired most of the time. I have great difficulty sleeping and constant flash-backs.”

Much remains unknown about long COVID. Thus, since his release from hospital he has had numerous tests and is not expecting to have his last one until next February.

The longer the virus circulates, the more dangerous its variants may become here in Portugal as across the world, but vaccination reluctance continues.

Complacency is not the only reason. Lack of confidence is another, even though the data shows that the benefits of all the well-known vaccines vastly outweigh the risks. Full vaccinations have so far proved to be at least 90% efficient in giving protection. The reason for having them is self-evident.

Few can use the excuse that getting a jab is inconvenient. The programme in Portugal is efficient and the percentage of the population with at least double jabs (88%) is one of highest in the world.

Psychologists say that fear of needles causes some vaccine reluctance. Other more complex psychological reasons exist too and misinformation has played a significant part in the problem.

Somehow complacency and unreasonable concerns must be overcome if possible, all the more so because the Omicron variant is extraordinarily transmissible. It has convinced many scientists that COVID will be rampant for at least another one or two years and booster jabs may be recommended annually.

Meanwhile, the plea from our Portimão Hospital survivor:  “Get vaccinated and take all the proper precautions!” 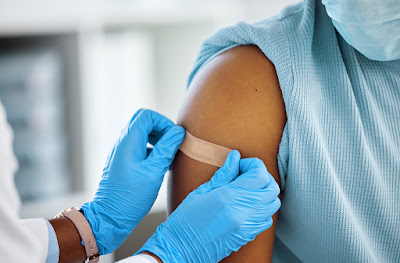 Posted by Portugal Newswatch at 3:48 PM